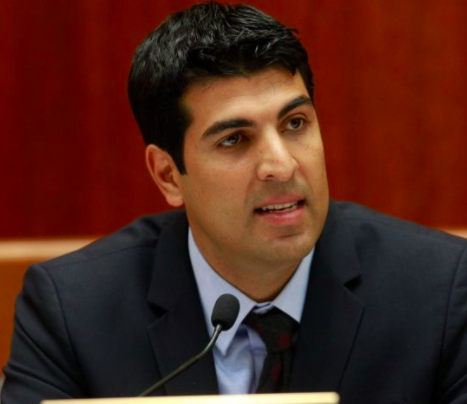 Accusations: Pamela Lopez, a Sacramento lobbyist, alleged that Dababneh sexually assaulted her. According to Lopez, in 2016 Dababneh pushed her into a Las Vegas hotel bathroom, masturbated in front of her and urged her to touch him.

Jessica Y. Barker, who was Dababneh’s subordinate when they both worked in US Congressman Brad Sherman’s District Office, also came forward and accused Dababneh of sexual harassment. Barker asserts that she has talked to other women who Dababneh has also harassed.

Nancy Miret, 26, spent time with Dababneh over two months in late 2013, primarily at his Encino apartment. They had consensual sex on one occasion, but after that, Miret said she had multiple nonconsensual sexual encounters with Dababneh. “If you’re saying ‘No, no, no, no,’ and you stop and then you’re quiet, you still never gave consent,” Miret said. LA Times, Dc 14, 2017, by Melanie Mason

Jenn Kang said Dababneh was her supervisor in 2004 when, as an 18-year-old just out of high school, she worked on the Kerry campaign in a Pasadena field office. She alleged that Dababneh exposed his penis to her and asked her to touch or perform oral sex on him. He told her he had feelings for her, and asked if she was a virgin. “I wanted to jump out of my skin,” she said. LA Times, Dc 14, 2017, by Melanie Mason

Carrie McFadden, who worked with Dababneh when he was the Chief of Staff for Rep Brad Sherman, said Dababneh would regularly talk about his sex life during his frequent visits. He once offered her a raise if she could convince a UCLA student to have sex with him. McFadden did not report the incident to her boss, but she confided in two friends. LA Times, Dc 14, 2017, by Melanie Mason.

Immediate Consequences:  On December 5, Assembly Speaker Anthony Rendon announced that the Assembly Rules Committee would hire an outside law firm to investigate the incident described by Pamela Lopez, and Dababneh would temporarily step down as chair of the Assembly Banking and Finance Committee.

Dababneh’s Initial Response:  Dababneh announced his resignation effective Jan 1, 2018. He said it wasn’t because of the allegations, but just because he had lost interest in being a lawmaker. Dababneh has strongly denied the accusations and threatened to file defamation lawsuits against his accusers.