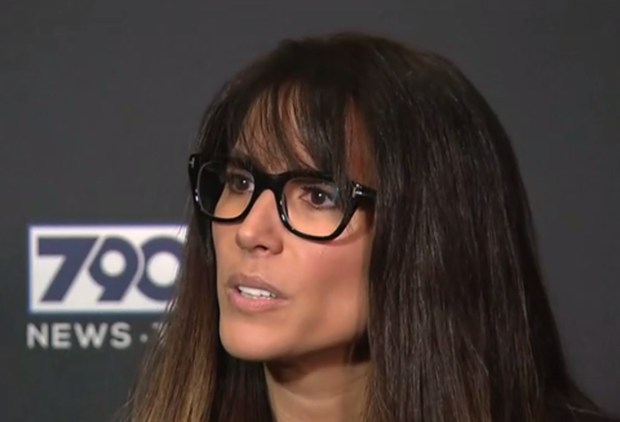 Tweeden says Franken forced an unwelcome kiss on her during their first rehearsal of a 2-week USO tour in Kuwait and Afghanistan in December, 2006.  She also published a photo of Franken’s hands hovering over her breasts while she appears to be sleeping. 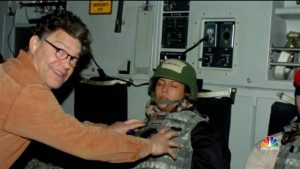 She further describes petty and demeaning actions Franken took toward her after the first alleged incident. Actions she believes were some kind of payback or retaliation for having rebuked him.

Her Own Words: Tweeden published her story, “Senator Al Franken Kissed and Groped Me Without My Consent, And There’s Nothing Funny About It,” in this KABC blog post, on November 16, 2017.

Tweeden also gave many interviews telling her story. Click below to watch them. 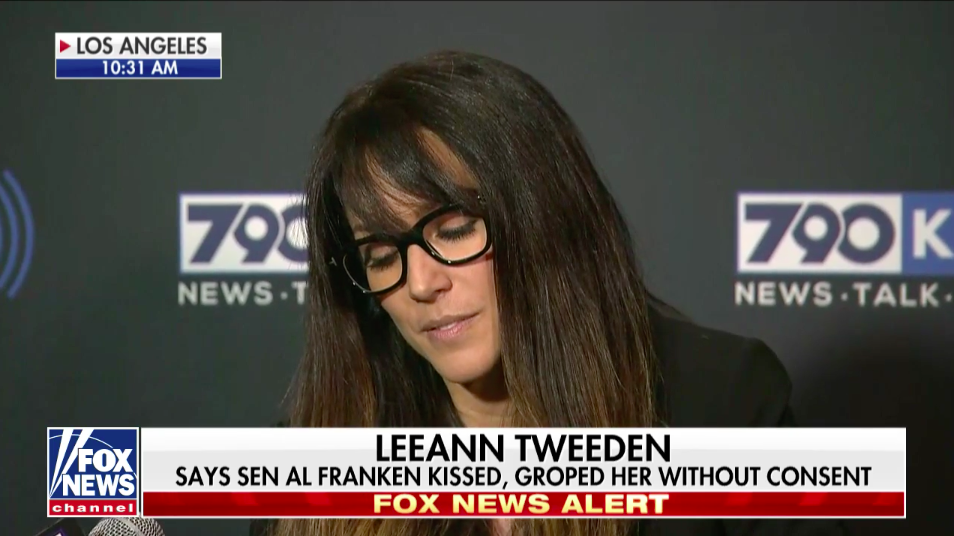 Many have questioned Tweeden’s story because:

1. She was formerly a model, including in Playboy.

This is an invalid reason to question her. Every woman has a right to say no, in every moment. It doesn’t matter if she’s drunk or scantily clad or works as a hooker. No means no.

2. A rumor about the photographer circulated online that the person who took the picture of Franken playing with Tweeden's breasts had surfaced and admitted that the photo was staged, and that Tweeden was in on the gag.

This has been proven false. Read more about it on Snopes.

3. A photograph of a kiss between Tweeden and Franken surfaced shortly after Tweeden published her allegation. In the picture, you can see Tweeden's arms wrapped tightly around Franken's neck.

So how can it be true that he forced himself on her?

(Spoiler alert: it can't. Which is extremely disheartening for those of us whose rallying cry is, "Believe the women!")

More about the kiss allegation Hide +
Tweeden's explanation is that the photograph is of the live performance; whereas the forced kiss happened backstage an hour earlier.

But that explanation doesn't hold water either. In her allegation, she not only describes the forced kiss she says happened, she also describes the actual kiss that she says took place shortly after the alleged forced kiss during rehearsal. She writes, "I performed the skit as written, carefully turning my head so he couldn’t kiss me on the lips." But n the photo above, she is most certainly not "carefully turning her head."

Unfortunately for those of us who insist we must "Believe the women!", the photograph of Franken and Tweeden engaged in a big old lip lock just doesn't line up with Tweeden's account of what happened.

3. A video also surfaced, which showed Tweeden playing grab-ass with the guitarist on the same USO trip.

So if she had just done it to the guitarist - why couldn't Franken do it to her??

Here's why not. (and watch the video) Hide +

This is where this question of CONSENT comes into play.

It is in fact completely plausible that Tweeden was happy to play grab-ass with the guitarist, but felt revulsion at the idea of Franken playing bobby-grab with her.

The lesson to be learned here gentlemen is that just because a woman is willing to do something with some other guy, doesn't mean she's willing to do it with you. So for you to do something to her, even if she just did the exact same thing to someone who's not-you, is only setting you up for a potential harassment allegation.

4. Evidence of a smear campaign. It emerged that prior to the publication of Tweeden's allegation, Republican dirty-tricks operative Rodger Stone had orchestrated a massive and coordinated online campaign to promote Tweeden's story and thus destroy Franken, a powerful Democratic Senator.

This raised the questions, How did Stone know about Tweeden's allegations before she made them public?

{Need to fill in the details about how Stone knew. http://thehill.com/blogs/blog-briefing-room/360726-stone-appeared-to-know-franken-allegation-was-coming }

5. A juicy book deal. It was alleged that Tweeden had just signed with Sinclair Broadcast Group, as a reward for having gone along with the smear campaign.

This has been proven false by some seriously hard-core investigative journalism by Maracat. Daily Kos published this article, The Making of  Rumor: Does Tweeden Have a Book Deal? on Nov 22, 2017, which explains how the rumor got started.

We should still believe Lee Ann

Why she's telling her story now:

Tweeden says that at the time of the incident, she was fearful of career repercussions if she said anything. Fears she says her now-husband agreed with at the time. But now a decade later, she says she feels on much more solid footing, professionally.

She also wrote, in her original allegation, that she had been inspired by the interview she conducted with Congresswoman Jackie Speier (D-Ca) a few weeks earlier. In that interview, Speier told her story of having been sexually assaulted by a Congressman when she was a young aide.

The incident sounded to Tweeden like exactly what Franken had done to her. She decided that now was her time to finally tell her story. Both for herself, and for other women:

“Maybe I have a platform to speak out, because if he did this to somebody else or if anybody else has stayed silent or anybody else has been the victim of any kind of abuse, maybe they can speak out and feel like they can come forward in real time and not wait a decade or longer,” Tweeden said in an interview with Good Morning America.

Franken made a public statement, and also wrote Tweeden a letter (which she read on the air of The View), saying that while he apologizes for the fact that his actions left her feeling violated, he "remembers that rehearsal differently."

Tweeden's multiple interviews on the subject are compelling and credible. Not only the way she describes the allegations; but also the way she talks about small ways that Franken demeaned her throughout the trip. She also riffs on the negative repercussions she fears she might encounter in her career, if she brought her allegations to the USO or the trip's sponsor.